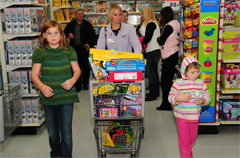 Stores across Iowa that sell clothes and shoes will be busier today and Saturday, thanks to the state’s 15th annual Sales Tax Holiday.

The state’s 6 percent sales tax will be waived as well as local option taxes for purchases of clothing, footwear and a few other select items.

The holiday has gotten consistently good reviews over its previous 14 years, according to Victoria Daniels, at the Iowa Department of Revenue.

“I think from a retailer’s perspective, they know it’s a good time to get people out to the stores to shop, so retailers probably think it’s a success,” Daniels says. “I would believe the average consumer thinks it’s a success because they get to go and get a little bit of a break on back-to-school clothing and footwear.”

The state gave up roughly $3.4 million in sales tax revenue from the holiday last year. The projection for this year is a savings for consumers of $3.6 million. Like most good deals, there are a few strings attached, Daniels notes. “Basic parameters are: clothing and footwear only, so that’s not going to include any kind of school supplies, like computers, pencils that type of thing, and not backpacks,” Daniels says. “Backpacks are not considered to be clothing.”

Consumers also need to keep individual prices in mind as they fill up their shopping carts. “The other important thing to remember is, the item you’re purchasing must be under $100,” Daniels says. “If it’s $100.01, it won’t qualify for the sales tax exemption.” Consumers nationwide are expected to spend $68 billion on back-to-school shopping this year. The clothing category is broad and includes a wide list of items, like: socks, boots, coats, diapers, jeans, underwear, swimsuits and pantyhose.

Find more information on the Sales Tax Holiday at the website: tax.iowa.gov