You are here: Home / News / State looks at expansion of Park and Ride system 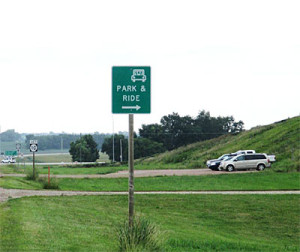 The Iowa Department of Transportation has created statewide plan to help develop and expand the Park and Ride System. Jennifer Roberts of the DOT says the system has been around for awhile.

“Back in the 80’s when individuals were trying to save money on gas, the public would request areas to park and the DOT would have some excess right-of-way — or maybe places where they would store gravel — and they’d let individuals park on those areas,” Roberts says.

The areas are commonly gravel parking lost where people park their cars and then either car pool or van pool to work. Robert says they are looking at the best areas to add Park and Ride lots. She says they looked at commuter data and passenger/traffic data to identify the ideal locations for new areas. “And most of those locations are along urban corridors, just some examples around the state, Ames to Des Moines or Cedar Rapids to Iowa City,” Robert says.

Many of the early Park and Ride locations were in rural areas, as people looked to commute together into bigger cities. Robert says the locations being considered now in urban areas help ease traffic congestion by having people commute to the edge of cities and cutting the number of vehicles in the heavily traveled areas. No matter where they are located, Roberts says the Park and Ride lots help people in a variety of ways.

“Some of the benefits are to save money on gas, also to save wear and tear on your vehicle — maybe you don’t have to get oil changes as much is you are sharing the driving,” Roberts says. She says overall it saves wear-and-tear on the roads if there are fewer vehicles using them.

New sites are still in the review stage. Roberts says they’ll first look at existing right-of-way areas to see if there is land available to use for the proposed sites. If you are interested in taking part in a Park and Ride program, Roberts suggest you check first with your area transit agency. “As one example, the local transit agency for the central Iowa/Des Moines area is DART. They have a ride-sharing software and ride sharing services that they provide. They also provide a van pooling program,” according to Roberts. She says many employers also help set up programs for workers.

You can find out more about the Park and Ride sites on the DOT’s website at: www.iowadot.gov/ParkRide.

Photo courtesy of the DOT.