You are here: Home / Health / Medicine / Official: Iowa has 700+ inpatient psych beds, ‘not sure’ more are needed 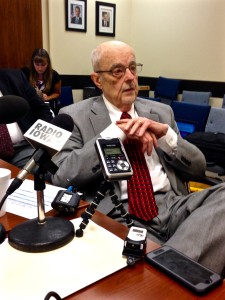 Chuck Palmer speaks to reporters after the Iowa Council on Human Services meeting.

The head of the Iowa Department of Human Services says he’s “not sure” there’s a need for more in-patient psychiatric bed space in Iowa for adults suffering from acute mental illnesses.

Advocates for the mentally ill have raised concerns after the state-run Mental Health Institutes in Clarinda and Mount Pleasant were closed June 30th. Chuck Palmer briefed the Iowa Council on Human Services late this morning.

“The vast majority of people with mental illness will never have to be in in-patient treatment,” Palmer said, “…and shouldn’t if we do a decent job.”

Palmer is touting a “redesign” of the state’s public and private mental health care delivery system that was begun in 2011. Palmer said the goal is to have a wider range of services availble, closer to the patient’s home.

If you were to ask me today: ‘Palmer, do we need more psychiatric beds?’ I’d say: ‘I’m not sure,'” Palmer told the council. “I know we are developing more alternatives.”

There should be more attention paid to “specialized care” immediately after a mental illness is first diagnosed, according to Palmer, along with more treatment options for juveniles.

According to Palmer, today in Iowa there are more than 700 spaces for adult inpatient psychiatric care in 27 private hospitals and the two remaining state-run Mental Health. As of August 1st, Palmer and his staff have a new electronic system to track openings. Palmer says it will help hospitals track down an empty bed for a patient suffering from an acute mental illness, although some hospitals are having technical issues with the system today. The Mental Health Institute in Mount Pleasant provided inpatient services to patients with the dual diagnosis of substance abuse and a mental illness, while the MHI in Clarinda provided care for frail elderly patients who had a mental illness. Three of those patients have died after being transferred to private facilities. Palmer extended his condolences to the families, but he told the council he’s not sure the state should be in the business of providing geriatric care to mentally ill patients.

Members of the Council on Human Services praised Palmer’s work and said it was too bad all the news about the mental health redesign has been negative and few have focused on the “really positive” big picture of revamping the system so ultimately care can be delivered closer to home.