You are here: Home / News / Clinton: ‘It’s not about Benghazi…It’s about politics’ 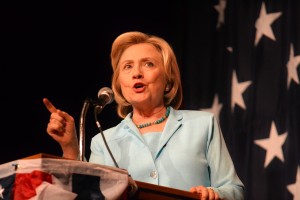 A raucous crowd gathered tonight at The Surf Ballroom in Clear Lake to hear from four Democratic presidential candidates — and Hillary Clinton, the first to speak, delivered a strong response to GOP critics focused on her use of a private email server while she was secretary of state.

“Now they’ll try to tell you this is about Benghazi, but it’s not. Benghazi was a tragedy. Four dedicated public servants lost their lives…Let’s be clear: seven exhaustive investigations, including by the Republican-controlled House Armed Services Committee and the Republican-controlled House Intelligence Committee have already debunked all of these conspiracy theories. It’s not about Benghazi,” Clinton said, to cheers. “And you know what’s it’s not about emails or servers either. It’s about politics.”

Clinton said she’s been doing her part in the investigations and “just provided” her server to the Justice Department.

“But here’s what I won’t do. I won’t get down in the mud with them. I won’t play politics with national security or dishonor the memory of those who we lost. I won’t pretend that this is anything other than what it is, the same old partisan games we’ve seen so many times before, so I don’t care how many Super PACs and Republicans pile on. I’ve been fighting for families and underdogs my entire life and I’m not going to start now,” Clinton said, to cheers.

Clinton began her speech by touting the endorsement she got this weekend from former Iowa Senator Tom Harkin. Vermont Senator Bernie Sanders was second to speak at the “Wing Ding” and he began by talking about the “political revolution” he’s trying to spark in the country.

Sanders got big cheers for his call for a single payer health care system and his opposition to the Keystone pipeline. Sanders said the American people are ill-served by the “establishment politics, establishment economics and the establishment media.”

“And they understand that the mainstream media is prepared to discuss anything except for the most important issues facing the American people,” Sanders said, to cheers.

Martin O’Malley, the third candidate to address the crowd, had a strong cheering section in the hall and he delivered a speech touting his “progressive” accomplishments as Baltimore’s mayor and Maryland’s governor.

Many of the people in the crowd, like Lahoma Counts of Mason City, are uncommitted at this point.

“I want to wait ’til I see everybody and see where they stand,” Counts said.

Donna Tull, a retired kindergarten teacher, was at the event to listen, and evaluate how the candidates stand on key issues.

“Well, of course education would definitely be one of mine and I definitely don’t want us to get into another war, so those are things for sure,” Tull said. “And I’m one of these people that feel a woman gets to decide what to do with her own body.”

“Bernie might be all right, but he’s a little old, so I don’t know,” Schrodder said.

Karen Schrodder, his wife, is a bit more ready to choose.

“I’m kind of leaning towards Bernie,” she said. “…I agree with everything he says.”

Attorney General Tom Miller, who is backing Clinton, sees energy for Clinton, Sanders and Martin O’Malley — and he suspects Biden will soon enter the race.

“Democrats really want to win,” Miller said. “They’re very concerned about a Republican president with a Republican House and a Republican Senate, so there’s some real drive and determination.”

(This post was updated at 11:19 p.m. with additional information)