You are here: Home / Human Interest / Replica of Vietnam Memorial Wall on display in Hawarden 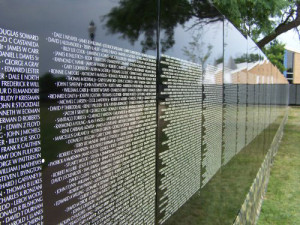 The Vietnam wall in Hawarden.

A half size replica of the Vietnam Memorial Wall is in northwest Iowa through the weekend. The “Moving Wall” arrived in Hawarden Thursday afternoon and features all 58,306 names of those service men and women that lost their lives during the Vietnam War.

Roger Johnson is the chairman of the Sioux County Commission of Veteran Affairs and is overseeing the exhibition of the moving wall. He says it is referred to as the “moving wall” not just because of its capability of traveling from town to town, but he says, the wall also stirs up emotions for those that view it.

“I think for the ones who have never seen the wall itself or been to a half-scale, it’s going to –especially for the Vietnam veterans — bring some closure. It will give them closure and some healing time,” Johnson says. The wall has a special meaning for Johnson. 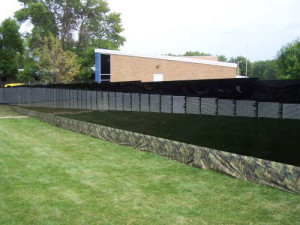 The names of those killed in the Vietnam War are displayed on the wall.

“I did serve in Vietnam in 67′, 68′, and on panel 16 west — my brother’s name is on there,” Johnson explains. In addition to his brother’s name, Johnson says there are four other names on the wall with either a Hawarden or neighboring town Ireton connection. Johnson says the local American Legion post had been trying for four years to bring the Vietnam replica wall to Hawarden.

Johnson says the “Moving Wall” will be accessible 24 hours, and it will have guards posted, as well as volunteers to assist with the locating of names. He says, like the Wall featured in Washington D.C., people will also have the opportunity to sketch a name. The Vietnam replica wall will remain on display until Monday, August 17th.