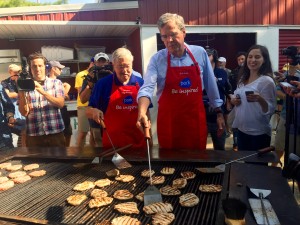 Terry Branstand and Jeb Bush grill together at the Iowa State Fair.

Governor Terry Branstad says the Iowa State Fair has been an “unmitigated success” so far, due to all the attention the national media is paying to the presidential contenders who are parading through the fairgrounds.

“Kind of the center of the political universe right now,” Branstad said. “Virtually every presidential candidate’s coming and we’re getting all kinds of national coverage.”

As of this evening, 14 presidential candidates from both political parties will have stepped onto the fairgrounds and all but two stepped up on The Des Moines Register’s Political Soapbox to deliver a speech to fairgoers.

“(As) the governor of Iowa, I think it can’t get any better than this,” Branstad says.

Branstad does not intend to endorse a candidate before the February 1t Caucuses. He escorted former Florida Governor Jeb Bush around the fair last Friday and Branstad told reporters he will do the same with any other candidate if his schedule allows.

AUDIO of part I of Branstad’s weekly news conference