You are here: Home / News / Ted Cruz: ‘We win this race running a populist campaign’ 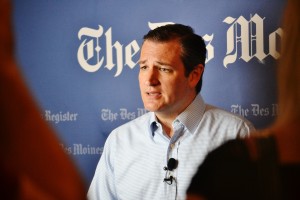 Ted Cruz speaks to reporters after his Soap Box speech.

Republican presidential candidate Ted Cruz says he’s running a “populist” campaign that will be the GOP’s best shot at winning the White House in 2016.

“If you see a candidate who Washington embraces, run and hide!” Cruz said this morning.

Cruz spoke from The Des Moines Register’s Political Soapbox at the Iowa State Fair this morning. He’s promising to abolish the Internal Revenue Service, junk the income tax code and impose a “simple, flat tax” instead. Cruz is calling for an end to sanctuary cities which refuse to deport undocumented immigrants and he’s blasting what he calls the “persecution” of American businesses that refuse to participate in same-sex weddings.

“How do we win this race? We win this race running a populist campaign of hard-working men and women against the bipartisan corruption of Washington, D.C.,” Cruz said and the audience applauded before he added: “that Hillary Clinton embodies.”

Cruz never mentioned any of his GOP rivals by name during his 20-minute speech at the fair, but he repeatedly tweaked Clinton. Cruz joked about why Clinton and the other Democratic candidates have yet to participate in a televised debate.

“It’s not widely know that the Democrats actually planned to have an earlier debate. The problem was the debate invitation was emailed to Hillary,” Cruz said, to laughter from the crowd.

The news media was a target for Cruz, too, as he talked about his goals for two terms as the country’s president.

“By the end of eight years, there are going to be an awful lot of newspaper editors and reporters and journalists who’ve checked themselves into therapy,” Cruz said, to laughter and applause.

Cruz invited the crowd to his rally this evening in Des Moines that will feature business owners who’ve been sued for refusing to serve same-sex couples who are getting married.