You are here: Home / Human Interest / You can help Miss Iowa with an online vote 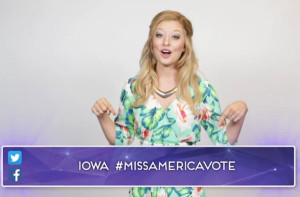 Iowans can help assure our state’s queen will be in the “Final 15” at the Miss America Pageant next month.

Miss Iowa Taylor Wiebers of Clinton, says when the 52 contestants are narrowed down, the first 14 will be chosen by the judges, but the 15th winner will be picked through social media.

Wiebers says that “People’s Choice” winner is something new at this year’s pageant. “My fingers are crossed that I won’t need the ‘People’s Choice,’ but so far, I’ve been overwhelmed with the amount of votes I’ve received,” Wiebers says. The voting is being done on Facebook and Twitter and it’s underway now.

Wiebers says you can vote for her by posting Iowa #MissAmericaVote on Facebook or Twitter. People from other states are voting for Miss Iowa and Wiebers says she appreciates that support. Weibers says, “Every state does have their contestant but to have people that are that friendly and know me and know how much this means to me to represent Iowa, getting those votes is just as important — if not more — than the ones here at home.”

The 21-year-old says you can likely find the postings by others and copy and paste it into your status. You can vote daily on both Facebook and Twitter. The voting ends September 10th. Wiebers attended both the University of Iowa and Clinton Community College. Her platform is to raise awareness about childhood cancers. She created a video to explain how it works.