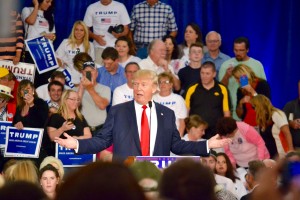 Donald Trump at his event in Dubuque.

Republican presidential candidate Donald Trump told a huge crowd in Dubuque tonight they are part of the “silent majority” that has catapulted him to the top of the polls — and he made a plea for them to stick with him when the voting starts five months from now.

“You know, it’s one thing to have the ‘summer of Trump’,” Trump said. “It doesn’t mean anything unless we win both the nomination and we’ve got to beat Hillary or whoever’s running.”

The crowd cheered Trump’s vow to stop eating Oreos because Nabisco is moving production from Chicago to Mexico and they cheered Trump’s promise to tax any foreign-made cars that are imported into the U.S.

“Who would you rather have negotiating against China, against Iran — what a deal that is, o.k., you talk about incompetent people — against anybody: Jeb Bush, Hillary Clinton or Trump?” Trump asked.

The crowd roared his name, and then began chanting “Trump” over and over.

Trump called Republican members of congress “weak people” who have failed to follow through on their campaign promises, like “knocking out” ObamaCare.

“I don’t know. There’s something about Washington. They look at these beautiful buildings, these beautiful halls and all of a sudden they become impotent. Is that an appropriate word? I think so. It doesn’t work. Put those two together,” Trump said, and the crowd laughed and cheered. “Something happens to ’em and all of a sudden they’re not fighters.”

“It’s a time to choose an alternative to electing the same kind of people over and over again and getting the same results,” Clovis said. “It’s time to disrupt the status quo.”

Clovis had been working for Rick Perry, but was among the Perry campaign operatives who were asked to continue working without pay. Clovis told reporters at a news conference before Tuesday night’s rally that he holds Perry in high regard, but left the Perry campaign as it transitions to a new phase. Trump took questions from reporters for more than half an hour and engaged in a lengthy and sometimes terse exchange over immigration policy with a reporter from Univision. Early in the news conference, Univision anchor Jorge Ramos stood and tried to engage with Trump and Trump repeatedly told Ramos to “sit down” because he had called upon another reporter to ask a question. A security guard escorted Ramos from the room, but Ramos returned later, then Ramos and Trump engaged in a testy, five-minute exchange on the subject.