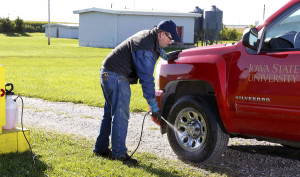 Iowa State University officials are “minimizing traffic” at the university’s poultry research farm south of the Ames campus to “safeguard” a flock of rare chickens due to concerns about the return of bird flu this fall.

Jodi Sterle, a professor in the ISU Department of Animal Science, says a poultry science class had already been rescheduled, to await the arrival of a newly hired professor.

“So we had already prepared to teach that in January, spring semester,” Sterle says. “So that helped or else we would have had to cancel that class, probably totally.” Five other classes that have traditionally used or visited the poultry research unit have been canceled, impacting about 500 students with majors in animal science and veterinary medicine.

During the fall semester, Sterle says the outbreak will be a “major topic” covered in two “contemporary issues” courses that students majoring in animal science are required to take. “Anything from foreign trade to biosecurity, the economics surrounding high pathogenic avian flu. We also hope to get students interested in the poultry industry,” Sterle says. “We honestly don’t have a lot of students come out of high school saying, ‘Oh, I think I want to be in the poultry industry,’ but there are some amazing careers to be had.” The mystery of how the bird flu is spread may help pique the interest of students, according to Sterle.

“We can talk about proper biosecurity and trafficking between buildings and showered in and showering out in some facilities and why we do that. We can talk about why we actually house birds indoors,” Sterle says. “Some of our students don’t necessarily understand the science behind that.” Chickens and turkeys do not sweat, so they pant like dogs and pigs to cool off, so Sterle says the birds are kept in climate-controlled barns so they don’t have to expend calories trying to cool off in the summer — or warm up in the winter.

Some of the chickens that had been housed in ISU’s poultry research unit have been moved to a site maintained by the College of Veterinary Medicine. ISU officials say that site has a “higher level of biosecurity” for the birds.

The birds are considered a valuable research source, with genetic lines that date back to 1925. Since 2005, frozen semen samples from ISU’s poultry flock have been stored in a secure facility in Fort Collins, Colorado as another precaution.