You are here: Home / Sports / Newell-Fonda streaks into clash with #1 West Bend-Mallard 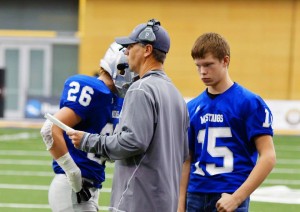 A loss in week three of the 2014 season dropped Newell-Fonda’s record to 0-3. It would be their final setback of the season. Coach Brian Wilken’s team ripped off 11 straight wins en route to the 8-man state championship and head into Friday’s season opener ranked seventh in the Radio Iowa Poll.

In an 8-man game dominated by offense the Mustangs can get downright defensive. They held three of their playoff opponents to less than 20 points.

“We want to be a great defensive football team and on our priority list that is first and foremost”, said Wilken. I know that’s a different belief than some programs but that’s are belief that you can play great defense in the eight man game.”

One of the new starters this year is at quarterback where Jason Hess takes over for Brady Dicks, who accounted for 43 touchdowns last year. Hess stepped when Dicks was injured in the championship game.

Newell-Fonda opens with a visit to a top ranked West Bend-Mallard team that blanked them 18-0 in last year’s season opener.

Ryan Thompson from KAYL in Storm Lake contributed to this story