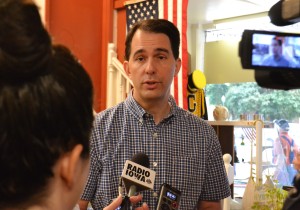 Republican presidential candidate Scott Walker today said the murders of two journalists in Virginia are tragic, but this is not the time for a “political reaction.”

During a campaign event in Ankeny yesterday, Clinton called for “preventive measures and control measures” like universal background checks for gun purchases. Authorities say yesterday’s shooter was a former reporter at the Virginia TV station who had been fired two years ago and he bought his gun two days after the mass shooting at a South Carolina church in June.

“Obviously until I know more details I’m not going to comment on that individual specifically,” Walker said, “but what has been a common thread throughout many of these tragic situations are people who’ve been falling through the cracks when it comes to the warning signs of chronic mental illness issues and we’ve just got to make sure in the country just as we’ve tried to do in my state we get them the resources to make sure that they don’t get to that point.”

Walker, who is the governor of Wisconsin, spoke to about 40 people at a coffee shop in Greenfield this morning, then held a brief news conference. Walker has recently called on President Obama to cancel “the pomp and circumstance” of a State Dinner for China’s president.

“We’re giving them one of our highest honors at a time we probably should be taking China to the woodshed,” Walker said. “for the fact that just recently, not years ago when I was there, but just recently they’ve been involved in cyber attacks against the federal government of the United States.”

Walker, along with Iowa Governor Terry Branstad, visited China two years ago on a trade mission. Walker said he didn’t confront Chinese leaders over concerns about China’s alleged theft of intellectual property because he was visiting the country as the governor of a state.

“Governors are not there to do foreign policy,” Walker said. “…I believe there’s a long-standing tradition that you don’t…undermine the president when you’re overseas.”

But Walker said as a presidential candidate on American soil, he’ll speak his mind on this issue.

“The amazing thing is not only did they ignore our statement yesterday, but the White House press secretary said it was really important from their point of view to have relations at the highest levels so that they can move China forward on climate change,” Walker said. “Apparently climate change trumps concerns over cyber attacks, over human rights abuses, over manipulation of the economy.”

Walker said if he’s elected president, he’ll decide on a case-by-case basis which foreign leaders deserve a State Dinner at the White House.