You are here: Home / Agriculture / Branstad will meet with ‘old friend’ Xi Jinping in Seattle in September 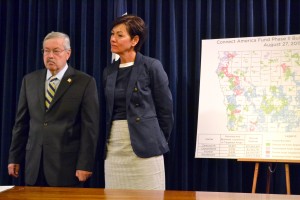 “I understand there are some issues right now with China with what’s happened with the devaluation of the currency, some of the issues with cyber security and whatever,” Branstad says. “But as you know the state of Iowa has had a long-standing friendship with our sister state Hebei and with Xi Jinping and I’m proud that he calls me an old friend.”

China’s president first visited Iowa in 1985 when he was a low-level agricultural official in a Chinese province. Branstad threw a state dinner for Xi at the state capitol in Des Moines in February of 2012, just before Xi became China’s president. Branstad has met face-to-face with Xi five times. That includes a trade trip to China in 2013 that included Walker, who is Wisconsin’s governor. Walker has said President Obama should not honor China’s president with a state dinner when he visits the U.S. this fall because the Chinese government was behind a cyber attack on the U.S. government. Branstad, meanwhile, plans to fly to Seattle to see Xi during his trip to the U.S.

“Would have preferred to have that in Iowa,” Branstad told reporters this morning, with a laugh, “but we got that last time and so I guess we can’t have it every time.”