You are here: Home / Fires/Accidents/Disasters / Parts of Iowa see flooding after heavy rain 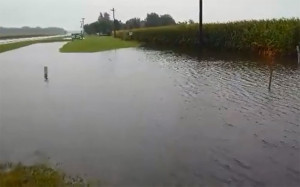 Water in a Hamilton County field.

Clean-up is still underway today after heavy rain caused severe flooding in parts of north-central Iowa over the weekend.

Hamilton County was hard hit, where many crops, roads and basements were washed over and washed out. Gregory Campbell is the mayor of Ellsworth, which was quickly inundated by the rising Squaw Creek on Friday afternoon after as much as nine inches of rainfall.

“Our whole city park, everything came from the north end and it literally filled our park to the point that we could not see grass,” Mayor Campbell says. “We have two or three homes in town that have lost their foundations and we have one that was probably a total loss.” The town’s fire station was used as a safe haven and “comfort station” for about 20 residents who were impacted by the flood waters. Campbell says he’s in touch with county and state officials on the flood damage in Ellsworth.

“We have had two or three times we’ve applied for grants and, unfortunately, we’ve been denied them,” he says. “It’s either due to a loophole or because of we simply just don’t have a river close enough to make an impact.” Campbell says residents all over town are cleaning up and trying to dry out their homes and possessions. “A lot of us are waiting for insurance companies, including myself,” the mayor says. “My basement, the water was up to my waist, so I’m going to need a new furnace, water heater & the whole bang. I’m hoping at least Governor Branstad will declare us a disaster area, we can get some FEMA people up here and we can help some of our citizens financially.”

David Young, of rural Stanhope, is the Hamilton County board of supervisors chairman. Young toured the areas affected by this past weekend’s rains and says the rain gauges were practically overflowing everywhere. Young says, “It looks like four-and-a-half inches or so in the northern part of the county and once you get down here in the belt between Stratford, Stanhope, Jewell, Ellsworth and on down to Randall, there have been reports of seven to nine inches.” A family from rural Dayton had to be rescued Friday afternoon as high water inundated their home. Residents were also evacuated from a senior living center in Stratford. Dry conditions are forecast for the next few days with another chance of thunderstorms by Thursday.