You are here: Home / Sports / Beathard ready for opening test 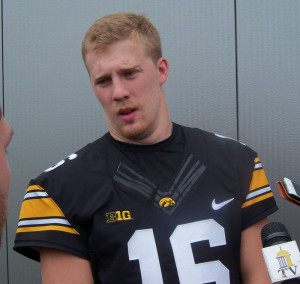 The Iowa Hawkeyes open the new season with a new quarterback when they host Illinois State on Saturday in Kinnick Stadium. It will be their first game since junior C.J. Beathard was given the keys to the offense just days after a Taxslayer Bowl loss to Tennessee.

Iowa coach Kirk Ferentz says the move has allowed Beathard to assume a leadership role on the team.

“The whole idea is for him to go out and play his best football and it’s not to follow up in anybody’s footsteps”, said Ferentz. “The bottom line is he’s his own guy and his own player and that’s what I have encouraged him to do is to go out and just do your best.”

Beathard says the Hawkeyes are anxious to erase the memories of last year’s three game skid to end the season.

“It’s been a long process but a process we needed to get better as a team”, said Beathard. “Come Saturday we’ll get to show what we have been working on and working towards this whole off season.”

Not only will Beathard’s family be at the game but his uncle, Kurt Beathard, is the offensive coordinator for Illinois State.