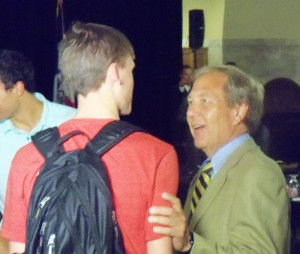 The new University of Iowa president answered a lot of questions about academics, but was also asked about athletics following his introduction Thursday.

Bruce Harreld says athletics play a key role for the university. “It is a glue that binds, and it’s very, very important. And I can spend a lot of time at a lot of different levels. One is, I think it was the Greeks who actually said that athletics were a portion of the body and the mind and the spirit and I think athletics and the role of athletics is very-very important in the context of the institution like that,” Harreld says.

Harreld says there is a lot to be learned from sports, whether it’s high-level, intramural or just for fun. He says the start of the football season highlights the role of high-level athletic programs to the university. “That is now even more important and plays an even bigger role, because it’s actually the glue that binds in many ways and brings the tradition and the alumni, brings them back… and it’s a wonderful spirit created across the community,” Harreld says. “And that needs to get continued, it’s part of who we are and I’ll do all I can to support it. I’ve got to tell you, they don’t need me on the sidelines coaching though. And part of my role is to continue getting the right people over that.”

Harreld talked about his desire to improve the university and was asked if he has a role in improving the football team — which has been the subject of much discussion. “Well, I think it’s to ask what I can do, ask the people who run that, I don’t think they need me kibitzing — even though there are a lot of people out there online kibitzing. I know there is some frustration with last season. I think there is a lot of enthusiasm for this year, we’ve got a new junior quarterback with C.J. (Beatherd), I think he is going to bring some great things to the team,” Harreld says. “But I am a cheerleader here, and if (AD) Gary (Barta) and the coach bring various issues forward to me, I’ll listen and I’ll figure out how I can help them and support them.”

Harold is expected to be introduced during Saturday’s season football opener in Kinnick Stadium.