You are here: Home / News / Irish duo Byrne and Kelly play in Iowa 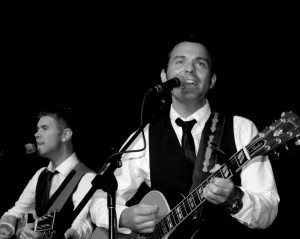 An Irish duo that’s making a big splash in the category known as “world music” is making one stop in Iowa, tonight.

Byrne and Kelly’s debut album, “Acoustically Irish,” hit number-one on the Billboard charts and on iTunes. Neil Byrne says he and Ryan Kelly are riding an incredible wave of popularity.

Byrne says he’s been pleasantly stunned by the support during the American tour. “Every time we come to America, it’s incredible,” Byrne says. “We start our first song at a show, it’s like preaching to the converted. They really take to what we do. That’s what has us coming back all of the time. The support is amazing…I suppose before we came over, we didn’t really know what we were coming over to,” Byrne says. “We didn’t realize how deep the roots of Celtic music ran. It’s huge!”

To supplement their second disc, recorded live in Australia, the band is now writing and recording their third album.

The set list includes Byrne and Kelly’s original music and their new spin on familiar classics. “Some of the songs we have on there are based upon old Irish airs that go back hundreds of years,” Byrne says. “They go back so long, people don’t know who wrote these songs but they’ve lasted the test of time because the melodies are so beautiful.”

Tonight’s show is at the Temple Theater in Des Moines.