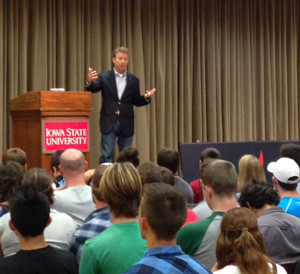 Rand Paul says Donald Trump is a “fake conservative” and it’s time for all the other Republicans running for president to “quit being shy” and take Trump on.

“I mean, this is combat,” Paul said of the campaign this evening during a brief news conference in Ames, Iowa. “He’s in front and we need to point out what he stands for, what he has stood for in the past, so people can make a real decision.”

Paul told a small group of reporters it’s his view that Trump has “crested” and is “headed for a fall.”

Paul spoke to a crowd of about 500 students on the Iowa State University campus this evening. During his speech, Paul rapped Trump for favoring the use of the government’s eminent domain power to seize property for building one of Trump’s Atlantic City casinos. Later, Paul told reporters there’s not “one conservative in America” who favors letting government “thugs” take property from smaller owners so “big corporate owners” like Trump can use it.

Earlier this evening, Paul posed a question on his Twitter account, asking what is says aboutg the GOP when former Texas Governor Rick Perry, who has a successful record of creating jobs “bows out” of the race while “a reality star leads in the polls.” Paul told reporters a couple of hours later Trump’s “only qualification” seems to be “celebrity.”

“People are going to start to say to themselves: ‘Oh my goodness, maybe this sort of bizarre fandom, by even the media, could lead to a selection process that isn’t the best for the country,” Paul said.

Paul and Trump will be among the 11 GOP candidates who will share the stage next week during a nationally televised debate and Paul suggests he’s ready to challenge Trump directly if given the opportunity.

“I don’t shy away from a fight and I’m not going to back away from describing him as a fake,” Paul said. “I truly think he’s a fake conservative and this is all about his celebrity, but I don’t think there’s anything genuine or sincere about what he believes.”

Paul is campaigning in Iowa this weekend. His campaign announced tonight there are now “Stand with Paul” chapters at 300 college campuses around the country, including 15 in Iowa. The Paul campaign aims to get 10,000 students at those Iowa colleges and universities to caucus for Paul on February 1………….