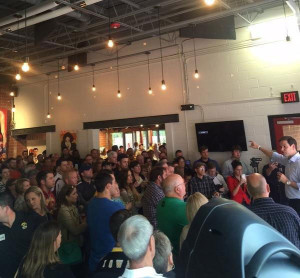 Republican presidential candidate Marco Rubio says Democrats, including Hillary Clinton, will be forced to defend their support of President Obama’s deal with Iran all the way ’til Election Day 2016.

“Iran will violate it and basically there’ll be technical violations. They’ll nip away at it. They’ll argue about whether it’s a true violation or not. Meanwhile, they’ll continue to sponsor terrorism. They’ll be engaged in all sorts of behavior around the world that will catch our attention,” Rubio says. “They’re not going to turn into Australia.”

Rubio has been promising to “get rid” of the deal on his first day in the Oval Office if he’s elected president.

“I’ll go further,” Rubio says. “I’ll ask congress for additional sanctions and I’ll make clear to Iran and the world if they try to build a weapons program, we’ll destroy it militarily.”

Rubio spoke to a crowd of more than 120 people in Ankeny early this evening. Rubio has recently added a communications staffer to his campaign team who worked in Iowa in the four months leading up to the 2014 election. The candidate himself says he will personally spend more time in the state this fall.

“When the leaves start turning colors, you’ll see us a lot more,” Rubio told Radio Iowa during a brief interview this evening.