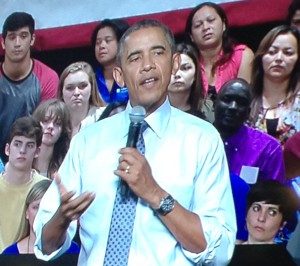 President Obama held a town hall meeting at a Des Moines high school late this afternoon. After resisting a few audience attempts to get Obama to weigh in on the 2016 presidential campaign, Obama closed the event with a strong rebuke of “some” candidates who’ve used what Obama called “un-American” rhetoric about immigrants.

Obama began, though, by reminiscing about all the time he spent campaigning in Iowa — in 2007.

“It is great to be back in Des Moines, You know I landed at the airport and saw the Hampton Inn there. I must have stayed there, like, 100 days,” Obama said and the crowd laughed. “I’m sure I’ve got some points or something. I could get a couple free nights.”

And Obama joked about how his eye sight is changing as his age advances.

“This is what happens when you get older, young people. First time I came to Iowa, I had no gray hair,” Obama said, and the crowd laughed. “I didn’t. Look at me now.”

But after some brief remarks, Obama began calling on people in the audience for the question-and-answer part of the town hall and the second questioner asked Obama to rate the presidential candidates’ education reform plans. Obama told the crowd he wanted to “beg off” on that one.

“Right now I’m going to try to stay out of the campaign season, partly because I can’t keep track of all the candidates,” Obama said and the crowd laughed. “..I’ll wait ’til it’s winnowed down a little bit before I have an opinion.”

But just a few minutes later, Obama did share an opinion. likely about New Jersey Governor Chris Christie, who has said the national teachers union deserves a punch in the face.

“If you hear a candidate say that the big problem with education is teachers, you should not vote for that person,” Obama said and the crowd applauded.

After more than an hour, the final question came from a young woman who asked the president whether undocumented immigrants who were brought into the country by their parents when they were children could get government loans for college.

“They now are American kids by every other criteria except for a piece of paper,” Obama said. “…The notion that somehow we would not welcome their desire to be full-fledged parts of this community and this country and to contribute and to serve makes absolutely no sense.”

Obama was just warming up to the topic.

“This whole anti-immigrant sentiment that’s out there in our politics right now is contrary to who we are because unless you are a Native American, your family came from some place else,” Obama said, to applause and cheers.

Then Obama ended with this: “When I hear folks talking as if somehow these kids are different from my kids or less worthy in the eyes of God, that somehow they are less worthy of our respect and consideration and care, I think that’s un-American. I do not believe that. I think it is wrong and I think we should do better, because that’s how America was made, by us caring about all our kids.”

Minorities make up 65 percent of North High School’s student body and Obama told the audience of students, parents, teachers and administrators that he chose to stop at North because it was a turn-around school, with new leadership that has set higher expectations for students. Obama also repeatedly urged the students to pay attention to deadlines and get their college applications and student aid paperwork filled out. The event was part of a bus tour U.S. Education Secretary Arne Duncan is taking around the country and there was an audible, collective gasp from the crowd of more than 1400 when Duncan said the federal government awards $150 billion in college grants and loans every year.