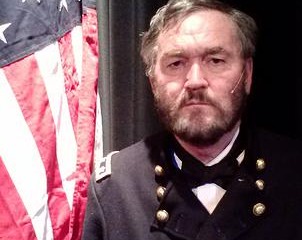 As presidential candidates are criss-crossing Iowa, a man who portrays a long-dead president is also on a tour of the state.

“One of the oddest things is, I look a lot like General Grant but in addition, I’ve had quite a bit of experience in community theater,” Grady says. “I’ve written a few things and I’ve always had an interest in the Civil War so I was able to pull together a one-man show based primarily on Grant’s memoirs.”

This year marks the 150th anniversary of the end of the Civil War. Grady says he’s done a significant amount of research into properly portraying Grant.

“I think if you asked most people what they know about Grant, they have two images in their mind,” Grady says. “One is of him drinking and the other is of him in his uniform with a cigar in his mouth. My goodness, there’s so much more about the man than that. He was a genuine American hero that we don’t think about or talk about much.”

Grady’s program is called “Unconditional Surrender” and his next scheduled performance is Thursday at 6:30 PM at the Kendall Young Library in Webster City.