You are here: Home / Crime / Courts / Bronze statue of a woman stolen in downtown Sioux City 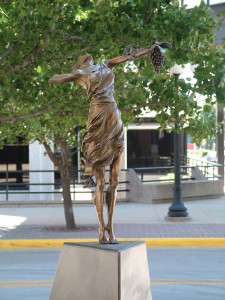 This Goddess of the Grapes statue was stolen form its pedestal in Sioux City.

Someone has swiped an 18-inch bronze sculpture of a woman from the downtown area of Sioux City. The city’s Art Center Director, Al Harris-Fernandez, says the worked called “The Goddess of the Grapes” was stolen sometime before Tuesday.

“We realized it wasn’t there when we went to do an inventory,” Harris-Fernandez says. “We’re not sure how they actually removed it. The part that was holding it together on the base was either bent off, cut off or broke off — so the sculpture is missing.” Harris-Fernandez says there are a number of reasons why someone might have taken the sculpture from its pedestal.

“It’s a cast bronze sculpture, which gives it a value other than its esthetic value, it gives it a value as bronze, which is expensive. So, sometimes these things get stolen with the idea that they would be sold as scrap metal,” Harris-Fernandez says. “Other times somebody would steal something because they like it and want to have it as their own. Or the other possibility — which we are hoping for — is that somebody just vandalized it and broke it off its pedestal and maybe carried it away somewhere and just dropped it after they realized it was so heavy.” The sculpture is worth around $4,500.

Another bronze sculpture was stolen from the downtown area several years ago and never returned. Harris-Fernandez is hoping that doesn’t happen this time. “It’s really robbing the pubic of its enjoyment of outdoor sculpture for the quality of life. So, we hope whoever took it returns it, or leaves it somewhere where somebody else will find it and let us know,” Harris-Fernandez says. Anyone with knowledge of the sculpture is asked to call police or the Art Center.