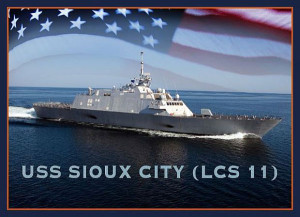 The captain of a new naval ship bearing the name of Sioux City surprised members of the Siouxland Chamber of Commerce Tuesday by unveiling the ship’s official crest.

USS Sioux City Commander Kevin Ralston and 11 members of his crew to unveiled the crest that includes several local symbols.

Ralston says they came to Sioux City a few months ago to do some research and then put together the design. The crest includes the Sergeant Floyd monument and the roof line of the Badgerow Building downtown. “We are really, really happy with the crest and the way it turned out, and we hope that you are too,” Ralston says. Ralston says he and the crew are working to get the littoral combat ship ready to begin its duty.

“We’re actively engaged in training, we’re getting ready and doing our best to prepare to take the USS Sioux City to sea and represent the U.S. Navy overseas,” Ralston says. The USS Sioux City is expected to be commissioned in the spring of 2017.