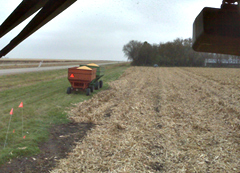 View from a combine.

The latest U.S.D.A. crop report shows five percent of corn and seven percent of soybeans have been harvested, while some farmers have been kept out of the fields by wet weather.

“I’m not sure I’ve talked to anybody who has said ‘upper 50s,’ I’ve heard lower 60’s to lower 70’s. And occasionally you will hear somebody a county or two north of here that will get into the upper 70’s. The range is pretty wide like it is every year, but in general the range seems to be a little higher than it has been,” DeJong says. He says the bushel yields in the 60 and 70 range seem to be fairly common.

He says the weather was good for the bean crop and he says farmers have learned a lot about how to manage the crop. “Their timing of planting is better. Many of these producers are more aggressive in weed management, they’re more aggressive in insect management. Put all of those practices together, they are all little benefits that give us better yields,” DeJong says. “Technology and improved genetics is important, but management has increase a lot in my opinion for soybeans also.”

The extension crops specialist says soybean moisture levels have been ideal for the beginning of the harvest season. He says you can get docked if the moisture is over 13 or at least under 14. He says most people he’s heard from are just under that level. DeJong says if the moisture levels drop down too far, it could create additional problems for farmers. He says that’s why farmers are in a hurry to get out and harvest the beans before they get too dry. DeJong says the dry beans can shattered easily by being hit as farmers harvest other rows, or any hail could also damage them.DeJong estimates that at least ten percent of the soybeans within this region have already been harvested.