You are here: Home / Business / Goal: credentials beyond high school degree for 70 percent of Iowa workers 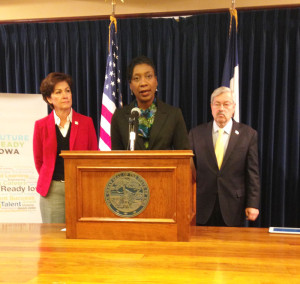 Iowa’s governor and lieutenant governor say they plan to work with educators and the business community to find new ways to ensure that 70 percent of Iowa workers have more than just a high school degree by 2025. Lieutenant Governor Kim Reynolds calls it the “new minimum.”

“The goal demonstrates that we want to empower more Iowans with the degrees and the credentials that really will enable them to attain the rewarding careers that are available right here in our great state.”

Neither Reynolds nor Governor Branstad are calling for more state spending on their “Future Ready” initiative. They’re calling for collaboration among colleges, universities and businesses to get more Iowans earning two- and four-year degrees, becoming apprentices and taking courses for new work certifications.

“We’re excited about the initiative,” Reynolds says. “I think it’s the next step that we need to take to make sure that we have a talent pipeline to meet employers’ needs.”

According to the Georgetown University Center on Education and the Workforce, 68 percent of jobs in Iowa in 2025 will require some form of training beyond a high school degree.

“A perennial problem for every state, indeed especially since the Great Recession, is how to find the skilled workers necessary to compete,” says Nicole Smith, a senior economist at Georgetown.

Smith says Iowa has more advanced manufacturing jobs than its Midwestern neighbors and those jobs require more skills — and they pay higher salaries, too.

The governor and lieutenant governor will hold public meetings in Waukee, Cedar Falls and Sioux City this month to discuss their “Future Ready” initiative. Branstad, Reynolds and Smith discussed the initiative at the opening of Branstad’s weekly news conference.