You are here: Home / News / Bush: ‘No other campaign comes close to the details’ in my tax plan (AUDIO) 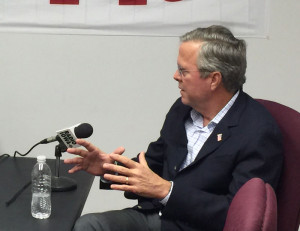 Republican presidential candidate Jeb Bush this afternoon told Radio Iowa his message to voters is “grounded in reality” and he’s “confident” about how his campaign is positioned in Iowa and elsewhere.

“There’s one path to prey on people’s angst and prey on their fears and prey on their anger and leave it at that, just say, ‘I’m the big guy on the stage and I’ll take care of it,'” Bush said, ‘or say: ‘We’re on the verge of greatness and here’s the plan to get there.”

Bush has just unveiled a tax plan that would reduce the number of tax brackets from seven down to three. It would end Social Security payroll taxes for Americans who’re 67 years old or older, but still working.

“No other campaign comes close to the details,” Bush said.

A series of other steps, including the end of the so-called “marriage penalty”, would mean 15 million more Americans would pay no federal income taxes, according to Bush. And Bush would reduce the corporate tax rate to 20 percent.

“I think it’s the right way to empower people that are struggling in the middle and to create a business tax environment that would create big investing,” Bush said.

Bush said the campaign “is a long-haul” and he’s not concerned by the polls, including one in his home state of Florida that shows him trailing Donald Trump.

“People are going to want someone who has a consistent, reform, conservative message based on the actions that they’ve taken, not just the words that they’re speaking,” Bush said.

And Bush told Radio Iowa he plans to remind voters of his eight-year record as Florida’s governor and his 2002 “landslide” reelection victory. Bush is wrapping up a three-day campaign swing through Iowa tomorrow.