You are here: Home / News / Vilsack: attacks on Iowa Caucuses ‘predictable’ but unlikely to bring change 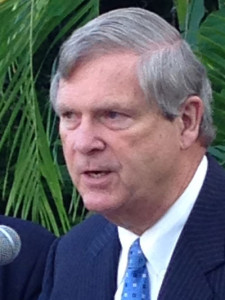 Former Iowa Governor Tom Vilsack says the chatter about displacing the Iowa Caucuses from lead-off status in the presidential selection process is “predictable” and he says the campaign calendar for 2020 is not likely to change.

“The same thing happens every four years,” Vilsack says. “People have raised questions about the process and then people say, ‘Well, how would you replace it? What would do to you make it better?’ And when they think about that, they realize, ‘You know, we’ve got a pretty good system right now.'”

Vilsack says the four “early states” of Iowa, New Hampshire, Nevada and South Carolina “represent a good cross-section” of the country, “allowing for a multitude of candidates to consider running for president and doing it on a retail basis without having to raise hundreds of millions of dollars to be able to do the advertising in a California or New York and then those states basically narrow the field and then the big states, ultimately, make the final determination.

“I think it’s a good system and I think at the end of the day it’s not likely to change.”

The Republican National Committee’s chairman recently suggested switching to a rotating, regional primary system in 2020 and Vilsack says that does raise concerns about the positioning of Iowa’s Caucuses.

“The chairman of the Republican Party did indeed stoke some interest in this,” Vilsack says.

Vilsack says Iowans “take very seriously” their responsibility to participate in the Caucus process and he points to the “competitive races” among Democrats and Republicans seeking their party’s 2016 presidential nomination. Vilsack, a two-term governor of Iowa, endorsed Hillary Clinton in 2007 after ending his own presidential campaign. He’s been serving as President Obama’s secretary of agriculture since January of 2009. In late August, Vilsack endorsed Clinton’s second bid for the presidency.