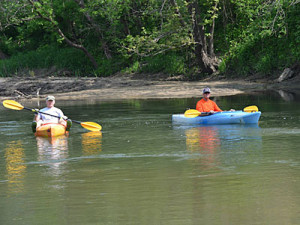 You won’t have much trouble traveling most of Iowa’s waterways this fall.

Tim Hall with the Iowa Department of Natural Resources says the U.S. Geological Survey looks at around 100 gauges across the state to get a composite stream flow.

“We’ve been running just slightly on the wet side or normal for the year — so stream flow is a little big higher than it would be normally this time of year — which is a pretty good place to be,” Hall says. He says the water in the streams and creeks is important.

“Stream flow contributes to a lot of things, it provides for habitat for fish and aquatic species, for migratory birds, its’ an ecosystem indicator. So, we kind of like to see stream flow at normal,” according to Hall. Stream flows often drop down in the winter time.

“Being a little big higher than normal is great going into the winter….it’s going to replenish farm ponds, it’s gonna keep low-lying areas with some water in them, so that there’s plenty of moisture out there when spring rolls around,” Hall says.

The statewide average precipitation was a little more than four inches in September, and ranked it as the 50th wettest September in 143 years of records. That rainfall helped fill up the streams.