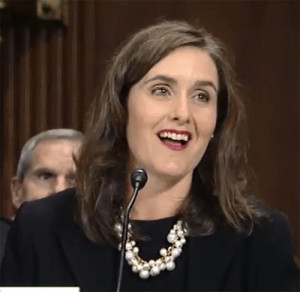 The Iowans nominated to replace two retiring federal judges in Iowa testified at a hearing in a U.S. Senate committee this morning. President Obama has nominated Rebecca Goodgame Ebinger to serve as a U.S. District Court Judge in the Southern District of Iowa. She’s currently an Iowa District Court judge in Polk County. 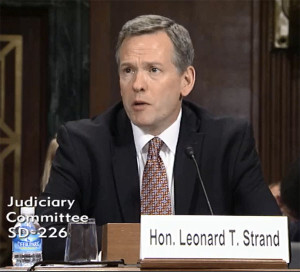 “Lessons about case management, how to keep cases moving,” Strand said. “I understood from my time in private practice how important it was for judges to issue prompt decisions.”

Iowa Senator Chuck Grassley is chairman of the committee holding today’s hearing. He asked Strand a few questions, including this one: “What are the qualities and characteristics you have seen any judge exhibit that you would hope to avoid if confirmed?”

Strand responded: “Senator, in my time as a trial lawyer, I would say that probably 85 to 95 percent of the judges I was in front of were excellent judges who tried hard. Judges have bad days, so occasionally I saw judges who were impatient, who were…”

Strand paused because Senator Amy Klobuchar of Minnesota, a member of the committee, had laughed loudly.

“I was only laughing because senators have bad days, too,” she told Strand.

Klobuchar was the only other member of the Senate Judiciary Committee who attended this morning’s meeting. Strand told the two senators he hoped to avoid having a “short fuse” in the courtroom and intended to “treat everyone with respect.”

The full Senate Judiciary Committee must vote on the nominations. Protesters are rallying outside Grassley’s Des Moines office over the noon-hour today, criticizing Grassley for failing to get more federal judges confirmed.