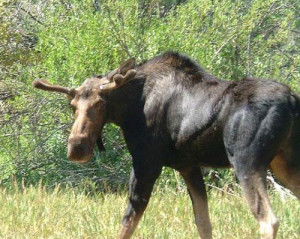 Residents in northwest Iowa have reported seeing a wandering moose.

“Moose are indigenous more to the northern part of the continent,” says Willie Suchy, the leader of the wildlife research unit in the Iowa Department of Natural Resources. “They like to have places where it’s cooler temperatures. They’re a big animal. They’re dark colored. They like areas with wetlands, willows, but they’ll adapt a little bit to other situations.”

A moose was first seen near Sibley two weeks ago and, on Sunday, a moose was seen south of Cherokee. Sightings have also been reported near Milford, Hartley and Sutherland.

“Generally what happens is young moose are looking for new territory, so they’re wandering around,” Suchy says. “…One of the reasons they don’t exist in the southern part of the state is there’s a brain worm that infects them and sometimes they’re being affected by that.”

An adult moose in this part of North America can weigh up to a thousand pounds and its antlers can be six feet wide. Earlier this month, a couple in the Minnesota “Iron Range” were injured when their car ran into a moose.

“In the north, where moose are common, that is a problem because they are dark and they’re hard to see on the highway,” Suchy says.

Minnesota’s Department of Natural Resources reports there’s been a dramatic 52 percent decline in the number of moose in Minnesota since 2010. Moose hunting seasons in Minnesota have been cancelled indefinitely and officials say there are now fewer than 3000 moose left in Minnesota.

Photo courtesy of the Minnesota Department of Natural Resources