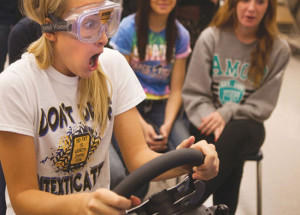 Teens use a driving simulator.

Teenage drivers may have more things to distract them when they’re behind the wheel than ever before.

Mick Mulhern, with the Iowa Governor’s Traffic Safety Bureau, says parents play a critical role in educating their kids about the many dangers of driving long before their kids are old enough to get a license.

“I try to encourage (parents) to drive with their seat belt on and don’t use a cell phone, set a positive example, because that is where these kids are learning to drive initially,” Mulhern said.

This is National Teen Driver Safety Week. Although it can be difficult for police to enforce, it is illegal in Iowa for people under 18 to use a cell phone while driving.

Mulhern says while cell phone use is a factor in a lot of crashes involving teens, that may not be the biggest problem. “Multiple passengers in the car with teen (drivers) is creating probably the biggest distraction because, inevitably, nobody is really watching the road,” Mulhern said.

Mulhern travels the state to talk to young people about the key components of driving. He notes simply lecturing or showing “shock and awe” type videos or photos of crashes don’t seem to work with today’s generation of kids.

“I use an interactive computer desk-top driving simulator to engage them. You have to respect that they’re smart and studious,” Mulhern said. “Lecturing and things of that nature don’t seem to work with teens. They’ve got to be involved and they’ve got to be able to see the common sense factor.” Motor vehicle crashes are the leading cause of death for 14-18 year olds in the U.S. and in Iowa.