You are here: Home / News / Superhero costumes still among favorites for Halloween 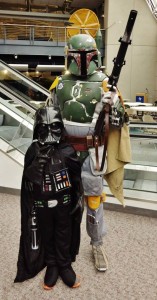 Iowans will likely see plenty of minions, Jedi knights and political candidates when trick-or-treaters make the rounds later this week. Kathy Harkrader at the Theatrical Shop in West Des Moines, says the caped crusader is this Halloween’s best-selling costume.

Harkrader says, “Superheroes are still number one and Batman takes the top, top notch all across the board, whether it be adults or children.” The fictional princesses made famous in the animated musical film “Frozen” in 2013 remain among the must-have costumes for central Iowa girls.

“Elsa and Anna are still in there playing a big part and Ninja Turtles, pirates and the other day I did an old-fashioned costume, a firefighter,” Harkrader says. “How wonderful is that?”

“The two that everyone talks about are Donald Trump and Hillary,” Harkrader says. “We have both of those here in the shop and they are actually going out very well, too.” She’s expecting a very busy week as customers snap up costumes in time for the big night, with Halloween arriving on Saturday.