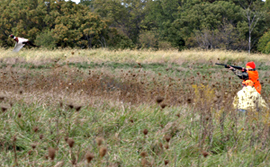 Hunters by the thousands are taking to the fields across Iowa this morning for the start of the state’s pheasant hunting season.

Jeff Barnes, a recreation safety officer with the Iowa Department of Natural Resources, says there were two pheasant hunting-related injuries in Iowa last year, with one injury in 2013.

Barnes says even seasoned hunters need to review their safety guidelines. “Some of the basic stuff like making sure you stay in a nice, straight line across the field,” Barnes says. “Always wear as much blaze orange as possible because that’s what makes you visible.” He says that bright orange attire can be a life saver — and it’s not optional.

“State law requires you have at least a ball cap that’s 50% blaze orange and any other article you have should be at least 50% blaze orange as well,” Barnes says. “We always suggest, the more, the better, but the upper third of your body is the most important because it’s the most visible as you’re walking through that taller grass.” He says to always make sure your gun is -not- loaded when crossing a fence or other obstacle to avoid an accidental firing — and properly identify the target.

Barnes says if you enjoy hunting, share the enthusiasm, especially with the younger generations. “Try to get kids involved in the outdoors and get folks that may not otherwise have the opportunity out there,” Barnes says. “If you have the opportunity to take a kid, take a neighbor, take a nephew, take somebody, get them going. You might just start them on something new that they really love to do.”

This year’s pheasant population is expected to be at an eight-year high and the harvest this year could reach a half-million birds. More hunter safety information can be found at www.iowadnr.gov.