You are here: Home / Agriculture / Rain slows harvest of corn and beans 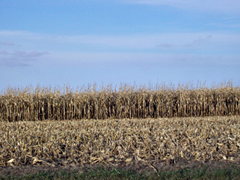 The harvest of Iowa’s crops was slowed significantly by rainfall toward the end of October, according to a report from the U.S. Department of Agriculture. Through Sunday, 85 percent of the state’s corn crop was harvested. Despite all of the wet weather, that’s 10 days ahead of last year and two days ahead of the five-year average.

Ninety-six percent of the soybean crop has been harvested. That’s equal to the five-year average, but eight days ahead of last year. Last week was Iowa’s wettest week in over a month-and-a-half.

The U.S.D.A. reports Iowa farmers, on average, had a little over 4 “suitable” days for fieldwork last week. Marion County received the most rain at 2.86 inches. There are areas of southwest and south-central Iowa where over 30 percent of the corn and 10 percent of the soybean crop remains to be harvested.