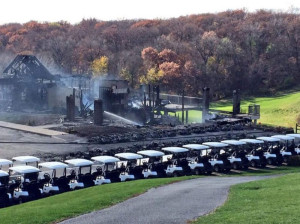 The remains of the Amana Colonies clubhouse after the fire. (KCRG TV photo)

A massive fire destroyed the clubhouse at the popular Amana Colonies Golf Club in eastern Iowa this morning.

No one was injured and the cause remains under investigation. The Amana Colonies Golf Club is consistently ranked among the top public golf courses in the state.

Kevin Alexander, who manages the driving range, told KCRG-TV the fire erased what was a fixture of the surrounding land.

“You pop over this hill, you see the clubhouse. It’s a beautiful sight. It’ll be sadly missed,” Alexander said. Fire crews were sent to the course around 3:40 a.m. The flames from the building also destroyed several golf carts parked nearby.

The club wasn’t scheduled to close for the winter until at least November 18. Now, there’s uncertainty about when it will open again.

General Manager Patrick Kilbride says the building was insured and he’s positive the community will step up if needed. “I know that the Amana community will help us out and do whatever they need to. We will just be looking to lean on them a little bit, and see what we can do. Hopefully rebuild and kind of take it from there,” Kilbride said.