You are here: Home / Sports / Rock and ladder trophy up for grabs in Oskaloosa 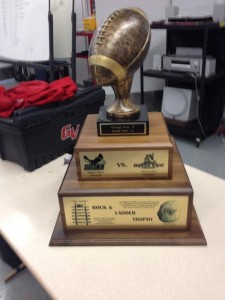 A division title and a trophy will be on the line in Oskaloosa on Saturday when Grand View visits William Penn in a key Heart of America Conference game.

“The other important thing for us is that Grand View has had our Rock and Ladder traveling trophy for the last two years and we want that thing back in the football office”, said Statesmen coach Todd Hafner. “There is a little bit of added incentive with the Rock and Ladder Trophy.”

This is the first season for both schools in the HAAC and both were previously part of the Mid-States Football Association. Grand View coach Mike Woodley says there is always a lot at stake when these teams play but it is a rivalry based on respect.

“You know we don’t have a lot of chirping out there between the players and that kind of stuff”, said Woodley. “It is just a good, clean and hard fought rivalry with great respect.”