You are here: Home / News / Governor says some providers trying to scare people on Medicaid plan 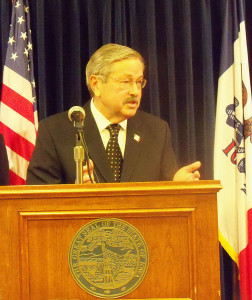 Governor Terry Branstad says some health care providers are trying to scare the public about the state’s transition to a privately managed Medicaid system.

Branstad was asked today  about the concerns some providers have expressed that they won’t get paid as much under the new system, and some smaller providers might have to go out of business.

“Well, that’s just not true. Actually if they become providers under the new system, they’ll get paid at the same level,” Branstad says.  “There’s a lot of misinformation being put out by some people who are trying to scare people. You know, I don’t like these scare tactics, I think we need to give people accurate information,” Branstad says. “What we’re doing is what 26 states have already done, including big states like New York and California. Some of the same providers — three of the four we’re looking at — are already providers, providing Medicaid services in the state of New York.”

Branstad says the new fees may be based more on outcomes than procedures performed, which could mean lower profits for some providers. “I understand some providers kind of like the current system, because the more procedures you do, the more you get paid,” according to Branstad. The governor was asked again if some providers might go out of business.

“No, no, this is all a scare tactic. Now listen, the providers all they have to do is sign a contract and they will get reimbursed at the same level,” Branstad replied.

The privately managed plan is set to go into effect on January 1st.