You are here: Home / News / Cold weather moving into Iowa, snow could be included 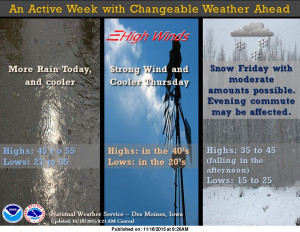 Iowans have enjoyed one of the warmest falls on record, but it’s about to feel a lot more like winter. Snow is in the forecast for Friday, but not before temperatures take a nose dive tomorrow.

“By Friday, we’re looking at snow across the northern and central portions of the state — mainly the Highway 20 and 30 corridors — we could see amounts of 3 to 7 inches there,” Small said. “That’s mainly on grassy surfaces, some of (the snow) will melt on the pavement.” In addition to the snow, it’ll be much colder over the weekend.

“We’ll see low temperatures by Saturday night in the 10-to-15 degree range with wind chill values well into the single digits, maybe down to near zero at times,” Small said.

A wind advisory is posted for much of northern and central Iowa on Thursday. It includes the cities of Des Moines, Ames, Marshalltown, Waterloo, Mason City, Fort Dodge, Sioux City, Storm Lake and Denison. In Des Moines, this has been the second warmest fall season ever recorded in Iowa’s capital city.