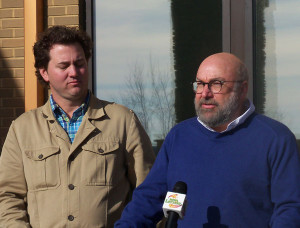 The Iowa Lottery showed off the new art outside its building in Clive Tuesday.

Iowa Lottery CEO Terry Rich talked about the metal pieces now in place at the entrance of the building.

“There are 15 sculptures in all, most of them are four-leaf clovers — but there is one five-leaf 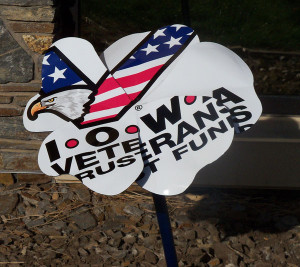 clover — which makes it unique. That’s the one that represents the five branches of the U.S. military and shows the logo of the Iowa Veterans Trust Fund, which receives a portion of Iowa Lottery proceeds each year,” Rich explained.

The other clovers each have a theme too. “Our clovers represent education, recyling, agriculture, the arts and our ever-changing world,” Rich says. “We hope the result ultimately is fun, reative, it has depth and meaning that people can discover as they go from clover to clover.” 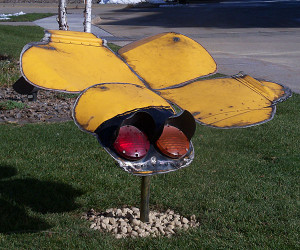 The Iowa Lottery was required by state to spend one-half of one percent of its budget for the building it purchased on public art. That amounted to around $31,000 dollars for the clovers.

Dennis Reynolds created the clovers along with fellow artist T.J. Moberg. “They say a good indication of the quality of art is how it reflects the context of its location and the people who will be interacting with it,” Reynolds says.”And we really enjoyed this project especially because it was so much fun. And that’s really a reflection of the Iowa Lottery team and what it means to people.” 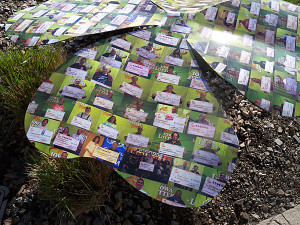 Reynold says it’s exciting to have the art at a high-profile site where people are visiting every day.

“We really are looking forward to people, the public as well as employees, coming to site and exploring and discovering these clovers, determining what they mean for them and having fun while they do it,” Reynolds says.

One of the clovers has photos on it of past lottery winners, and another is a traditional green clover that is near the enterance of the facility. That clover is expected to be one that people will rub for luck.