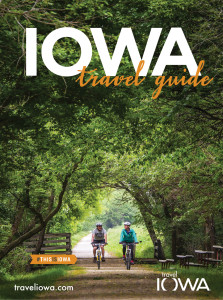 A trail that covers nearly 63 miles of rural landscape in southwest Iowa will soon be getting some big time exposure. A photo taken along the Wabash Trace Nature Trail was recently selected in a contest to grace the cover of the 2016 Iowa Travel Guide.

Rebecca Castle of Shenandoah is a longtime enthusiast of the trail. “You kind of feel like you’re out in the middle of nowhere and for some it, you kind of are,” Castle says.

The Wabash Trace started taking shape in the early 1990s as the trail was converted from a former railroad line. “It was one of the earlier rail-trails in Iowa and it goes through such rural areas. You go through towns like Mineola, Silver City, Malvern, and down to Imogene,” Castle says. The trail runs between Council Bluffs, near Iowa’s border with Nebraska, down to Blanchard on the Iowa/Missouri border.

There are many ways to experience the Wabash Trace, including cross-country skiing or even horseback riding on the equestrian trails that parallel parts of the trail. “I would say bicycling is the number-one use of the trail, but we also get a lot of walkers, joggers, bird watchers, and even people out there — in season — just picking berries,” Castle says.

The new Iowa Travel Guide, featuring the Wabash Trace on the cover, will released early next year. The Iowa Tourism Office distributes more than 100,000 copies of the Iowa Travel Guide each year. It can be found at Iowa’s welcome centers or ordered online.