You are here: Home / News / Cruz backer sees senator ‘drafting’ and ready to take the lead 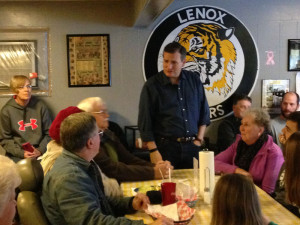 Republican presidential candidate Ted Cruz is making a three-day campaign lap around the state, with stops in 14 cities.

“I just want to say thank you all for being here. Thank you for standing up. I’m here asking for your support, asking for your help. We are building a grassroots army,” Cruz said to conclude an appearance at the Windrow restaurant in Creston on Saturday afternoon.

Wally Miller of Creston was there to show his support for Cruz.

“He’s the only one that makes sense,” Miller said, adding he has a screening test for candidates. “When I look at someone, would I trust them with my grandkids or my chores? And I would.”

Scott McLain of Creston compared Cruz’s positioning in the race to a NASCAR move.

“He’s drafting right behind the leader at just the right time and right before the Iowa Caucuses then he will go right by the leader on the last lap,” McLain said.

A Quinnipiac University poll conducted in mid-November found support for Cruz in Iowa has more than doubled since October, putting Cruz into second with 23 percent support behind Donald Trump’s 25 percent.

“A couple of months ago it was real strong for Trump and, believe it or not, Huckabee had some strong following — people from ’08, but Ted’s really making a surge,” Owens said.

A month and a half ago Roger Burger of Lenox signed up to be a volunteer for Cruz.

“I told them I wanted yard signs right now,” Burger said, with a laugh, “and everything else.”

Burger was in the crowd of more than two dozen who gathered at the Tiger Den restaurant in Lenox to hear Cruz Saturday afternoon. Burger asked Cruz about “ObamaCare” and Cruz revealed his own family’s policy is being cancelled and he has to get new health insurance.

“Now I’m not unique in that situation,” Cruz said, adding the policy cancellation was news to his own campaign manager. “There are millions of Americans who get their policy cancelled…This is a disaster.”

Cruz is promising to make the 2016 election a “referendum” on the repeal of “ObamaCare”. Cruz may have spent more time with the crowd at the Tiger Den than originally scheduled. Someone on the campaign team locked the keys in the SUV Cruz was riding in and the Taylor County Sheriff was called to open the vehicle.