You are here: Home / News / Part of state under Winter Storm Warning 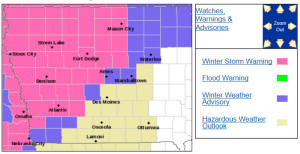 Another snowstorm is expected to bury a wide section of Iowa under a blanket of white today. Meteorologist Craig Cogil at the National Weather Service, says some 40 counties are under a Winter Storm Warning through this evening and for some areas, into the wee hours tomorrow.

“The heaviest snowfalls look to be up in northwestern Iowa, anywhere from six to ten inches by Tuesday morning as the system moves across the state,” Cogil says. “As you get a little further to the south and east, there may be a bit of freezing rain but certainly, about the southeast half of the state is just going to see straight rain with this system.”

While it’s still autumn, Iowa got walloped by another wintery blast just ten days ago that also left parts of northwest Iowa under more than a foot of snow, with significant snowfall across much of the rest of the state.

“It’s not unusual to have a winter storm in the month of November,” Cogil says. “To have two like this, kind of back-to-back, does start getting a little more unusual when you look at it from a climatological perspective. Certainly, people always need to be prepared for these things when we hit the winter season.” The start of winter is still a little over three weeks away on December 22nd.