You are here: Home / News / GOP ‘outsiders’ draw waves of cheers from weekend crowds in Iowa 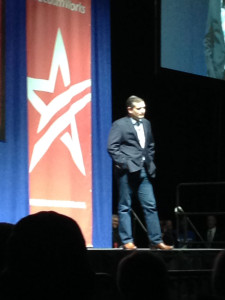 Candidate Rand Paul rode the Tea Party wave in 2010 when he was elected a Kentucky Senator.

“The Tea Party wasn’t about Democrats. It was about Republicans that were doubling the debt,” Paul said, to shouts of affirmation from the crowd gathered in Cedar Rapids.

Candidate Ted Cruz was the Tea Party favorite in Texas when he won a U.S. Senate seat in 2012 and his speech at the “Rising Tide Summit” drew a rousing response from the crowd.

“We’re not bitter, but we’re getting pretty angry,” Cruz said, to laughter, cheers and applause from the crowd.

“All of a sudden they’ll be saying: ‘You know, I’m going to throw my hat in the ring,’ and we’ll have a much bigger pool to choose from than just politicians,” Carson said, to cheers. “It’ll be a great thing.”

“Citizens, it is time to take our country back,” Fiorina said, to a wave of cheers. “It truly is.”

In the midst of that environment, former Pennsylvania Senator Rick Santorum — the winner of Iowa’s 2012 Caucuses — offered this advice: “This is too important an election to let anger motivate you to choose a nominee.”

The response from crowd of about 1500 in Cedar Rapids early Saturday evening? Silence.

Donald Trump spoke to a cheering crowd of 1500 in Spencer Saturday morning. The candidate who is riding a tide of voter anger began by touting his standing atop the polls.

“We are killing it, folks,” Trump said.

And Trump, who was suffering from laryngitis, had this response to critics who question whether he has the temperament to be commander-in-chief: “We’re not going to take this nonsense anymore from these totally incompetent politicians that don’t know what they’re doing.”

Trump claimed credit for the exits of Governors Scott Walker, Bobby Jindal and Rick Perry from the race and Trump assured the crowd in Spencer he has “plenty of ammunition left” to take out others who’re still running for the Republican Party’s 2016 presidential nomination.