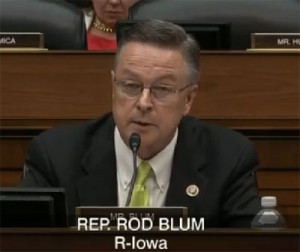 Republican Congressman Rod Blum of Dubuque says Republican leaders in congress tried to get him to lie to Iowans last January. Blum was the event’s cohost and he gave a short speech, touting his public vote against House Speaker John Boehner last January.

The 1,500 Tea Party activists who attended a weekend event in Cedar Rapids cheered during his remarks. Bloom says other Republicans said after the vote that he was crazy for voting in public against Boehner. It was Blum’s first official act as a congressman and Blum told the crowd in Cedar Rapids that he stiff-armed the advice he was getting from the political insiders.

Blum also joked with the crowd that the Iowa Hawkeye football team had been unbeaten since he’s been in congress. Blum made those remarks at 2:30, about five hours before kick-off of Saturday’s game. The event drew five GOP presidential candidates.