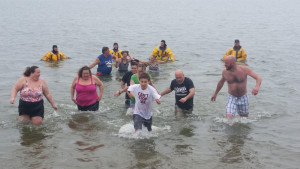 About 300 people braved the frigid water and spashed their way into Clear Lake on Sunday afternoon. It was the 18th annual Polar Bear Club event to raise money for two charities, Make-A-Wish and Toys For Tots.

Mary Cullinan of Clear Lake has been a part of the event for several years and says no matter the temperature, it’s always an interesting sensation going into the lake in December.

“It’s really invigorating and once you do get the guts up to do it, it becomes a habit,” Cullinan says. Melvin Sexton, of Mason City, says his wife had done the plunge four times in the past but this was his first time.

He says it was a shock, thinking he was prepared, but saying he wasn’t as prepared as he should have been, adding, when you hit the water, everything changes. Pia Perez-Reynolds of Mason City was another first-time dipper. She says she was nervous about going in and it ended up being colder than she expected.

“My legs felt like they were moving slower than I expected them to but overall, it was good and we raised money for a good cause,” Perez-Reynolds says.