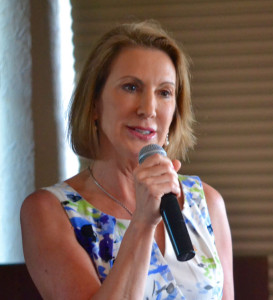 Republican presidential candidate Donald Trump’s call to bar all Muslims from entering the U.S. is dominating the conversation on the campaign trail.

Carly Fiorina, one of Trump’s Republican competitors, says the idea is unconstitutional. Fiorina, who campaigned in central Iowa today, says “religious tests” undermine the character of our nation.

“I think most people in our country are going to call it out and see it for what it is. I certainly am,” O’Malley says. “This is the sort of language that history has told us sometimes precedes fascism or worse the plunging of great republics into security states and It has no place in our presidential discourse.”

O’Malley says since ISIS casts the current conflict as a war between Islam and western culture, Trump is regretably reinforcing that notion.

“All patriotic Americans have a responsibility to push back against this,” O’Malley says.

O’Malley says the country has sadly “become almost numb” to mass shootings like the one last week in California.

“Now that this has happened and the motive is ISIL terror, I think people are asking themselves: ‘Why is it that we are the only developed nation on the planet where it is very easy to buy combat assault weapons?'” O’Malley says.

O’Malley favors reinstating the federal ban on the sale of assault weapons as well as new limits on the size of gun clips, so fewer bullets can be fired before reloading.

Republican Rick Santorum is the other presidential candidate campaigning in Iowa today and he is aligning himself with Trump. Santorum says Muslims from Syria, Libya and other areas where Muslims have been “radicalized” should not be allowed in the country. Santorum visited an ethanol plant near Nevada today to show his own support for the Renewable Fuels Standard and call attention to Ted Cruz’s opposition to the RFS.