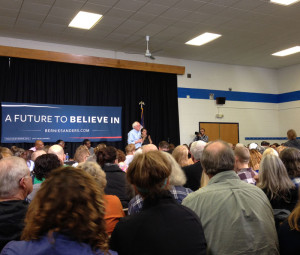 Democratic presidential candidate Bernie Sanders hosted a discussion about prison sentencing reform this morning in an elementary school gym in Anamosa that is less than two miles from one of the state’s prisons.

“What this campaign is about is not sound bites,” Sanders said at the start. “It is attempting to address some fo the most important issues facing our country.”

Sanders described himself as a “proud progressive” — but Sanders said doing things like restoring voting rights to felons who’ve done their time and ensuring released inmates and foster kids get help in making the transition to independent living should be a goal for conservatives, too.

“Providing a path for kids to go to the University of Iowa is a hell of a lot cheaper than providing them a path to go to jail,” Sanders said, to applause.

The crowd cheered Sanders when he called for ending for-profit prisons and they stood to applaud when a man in the audience declared the war on drugs a failure. Sanders blasted the media for failing to show the “reality of America” and for focusing so much on Donald Trump’s campaign.

“Let’s all fight it out. Let’s have a wall with Mexico. Let’s ban all Muslims. Let’s talk about that. Let’s not talk about how we come together to create an economy that works for all, rather than the top one percent,” Sanders said. to cheers.

Two former inmates who did time in Iowa’s prison system joined Sanders at the front of the room to speak about their experiences. Both have become mentors and counselors to others who’re leaving prison and trying to land a job.

“When we allow somebody to fall to the wayside, being black, brown, white…we do a disservice to our country. Everybody has something to offer,” Jerome Miller said. “Think about me, 11 years in the penitentiary. I changed my life.”

Sanders praised the men for having “unbelievable courage and determination” in transforming their lives. Sanders is on a two-day campaign swing through eastern Iowa, with town hall meetings planned later today in Clinton and Dubuque.