You are here: Home / Agriculture / PETA asks people to not eat meat during the holidays 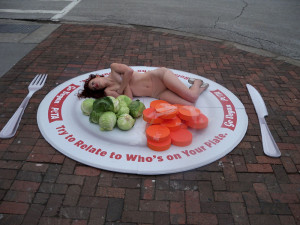 A scantily-clad volunteer for the group People for the Ethical Treatment of Animals, or PETA posed on a fake plate at a busy Des Moines intersection Wednesday hoping to convince people not to eat meat during Christmas.

PETA spokesperson Emily Lavender says they have a holiday message about animals.

“Just like us, animals have personalities, they’re intelligent, they form families and friendships if given the chance. They feel joy, but also pain and fear,” Lavender says. “It’s so easy to chose kindness this holiday for the billions of animals who are killed for the meat egg and dairy industries by simply leaving them off your plate this Christmas.” 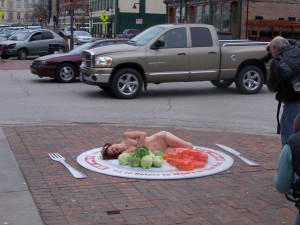 People walking and driving by take a look at PETA’s display.

PETA has staged various demonstrations through the years in Iowa, a leading animal producer in the country. The protests often come during the Pork Expo or State Fair, but Lavender says they’re hoping to reach those in a holiday mood.

“We’re just encouraging people to think about this issue and they can visit peta.org for a free vegan starter kit, or some delicious vegan holiday recipes. And also, just how they can help animals over the holidays,” Lavender says.

Lavender had trouble getting fake vegetables to stay on the plate on the sidewalk, as a brisk wind on the 32-degree day was blowing them around.

Thirty-one-year-old Meggan Anderson of Los Angeles was wearing very little after taking off her jacket and posing on the fake plate that included a large plastic fork and knife. Lavender says a scantily clad woman gets people’s attention. “This is like a fun and upbeat way to draw attention to a very serious issue,” Lavender says. 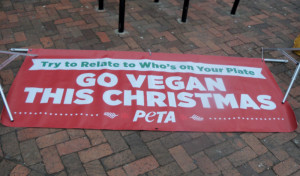 People walking by did take a long look at Anderson, and some of them took pictures.”You know it really gets people to stop and think about what’s going on, people talk about the issue, and that’s what we really want, we want a dialogue,” Lavender says. “Basically we want to make the connection that the animal on your plate was an individual who had thoughts, feelings, emotions, a will to live just like us.”

PETA has dressed up women in lettuce, and had women taking a shower on the streets of Des Moines to try and draw attention to their views on animal rights.