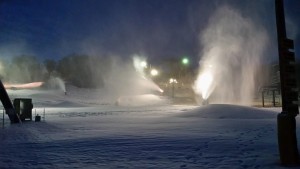 The first official day of winter arrives next Tuesday, but all of Iowa’s wintertime recreation areas have yet to open for business.

In Boone, Seven Oaks General Manager Joel Bryan says it’s very unusual to not be open this late in December.

“The normal opening for us for skiing and snowboarding is the second weekend in December,” Bryan said. “We’ve opened as late as December 26 and we’ve opened as early as November 22.”

The Seven Oaks Recreation Area isn’t the only business missing out on money because of a lack of snow and unseasonably warm temperatures. “Truly, it goes from Iowa all the way up through New York for these mild temperatures. There are a ton of ski areas that have not opened yet for the season,” Bryan said.

Temps have finally turned colder in Iowa and snow-making machines are running on the slopes at Seven Oaks. Bryan plans to open for the season at 11 a.m. on Sunday, despite a warm-up that’s in the forecast next week. “It is expensive to make the snow, but it’s even more expensive to not get open,” Bryan said.

Seven Oaks sits in a river valley facing north, so there’s less sun exposure on the slopes and it stays a few degrees colder than the forecast might suggest. So, Bryan is feeling confident about the artificial snow staying put. “Once we get it down, it sticks around,” Bryan said. “Probably the worst thing for us is fog, mist, or rain. The long range forecast isn’t looking great for us right now, but we also know that once we get into January, they are showing mid 20s for lows about every night. We can convert over 1,000 gallons of water a minute into snow, so we just need some consistent 20s — at a minimum — to be able to get more runs open.”

A typical Iowa winter allows for a 12-to-14 weeks of skiing and snowboarding, but Bryan says this season will likely be closer to eight to 10 weeks. He says it’s critical for Seven Oaks to be open in late December when so many students are taking a break from school. “Christmas break is huge for us. We’ve got to be open for skiing and snowboarding starting on (December 26). We do a 10-day run there where we’re open every day from morning to night,” Bryan said. “If we’ve got cold enough temperatures, we’ll probably be spending Christmas on the slopes making snow.”

Iowa’s other ski, snowboarding, and sledding resorts are located in Des Moines, Crescent, and Dubuque. There’s another winter sports park in Andalusia, Illinois — not far from the Quad Cities.