The Drake Bulldogs rallied late, but the Iowa Hawkeyes were able to hold them off for a 70-64 win in a Big Four Classic matchup in Des Moines Saturday.

The game was tied 30-30 at the half and Iowa built an 11 point lead in the second half, before Drake made a run to cut it to two points with 1:37 to play. Iowa coach Fran McCaffery says his team continues to compete in every game.

“I’ve been really impressed with our team’s ability to come out every night with a mindset that’s necessary to win. When you look at our losses — we lost to three really good teams — two at neutral sites, one on the road. And we gave everything we had and we were in a position to win, and that’s disappointing, all three of those games we had a chance to win,” McCaffery says. 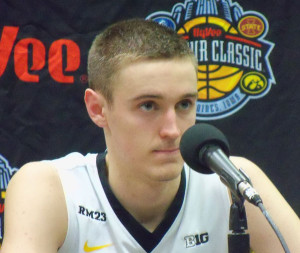 The Hawkeyes won with some help from a player who is not on scholarship. Redshirt freshman Nicholas Baer of Bettendorf walked on and against Drake had13 points, seven rebounds and six blocked shots. Baer, redshirted his first year, and was asked if this was what he envisioned in deciding to play at Iowa.

“I’m just excited to be here and just get a chance to play. I came to Iowa I always wanted to play at Iowa and coach gave me a chance to walk on. I always envisioned myself as a player, not just a practice player. When you come here you want to have a chance to compete on the floor,” Baer says.

He says he worked a lot on his shot during his redshirt year, with assistant coach Kirk Speraw as his shot doctor. “I didn’t need major surgery, but he gave me a few tweaks,” Baer says. He also credited his teammates with getting him the ball in the right place. McCaffery says he regretted agreeing to give Baer a redshirt after seeing him play last year in practice.

“I would say this, he probably spent more time working on his game than he did on his body, and I respect that. It’s great to be big and strong…but you’ve got to have game and what he’s got is he’s got a game,” McCaffery says. 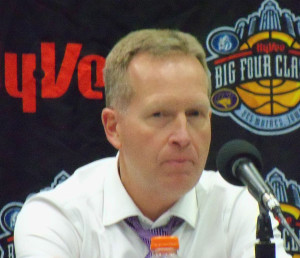 Drake coach Ray Giacoletti was happy with the effort of his team.”I am very proud of our team, we talked all week about taking the fight to Iowa,” Giacoletti says. He says this game was part of the ongoing building process for the team.

“We did a lot of good things that will help us down the road,” Giacoletti says. Iowa improved its record to 8-3, while Drake drops to 4-7.